Sushi is probably one of the best known Japanese cuisines, it’s a great on the go snack and meal with sushi bars all over Japan. Sushi is usually rice and fish, but you can get vegetarian ones wrapped in nori (seaweed).

Tempura is most commonly prawns but also seafood or vegetables in battered and deep fried. It’s very tasty but not so good for the waistline. 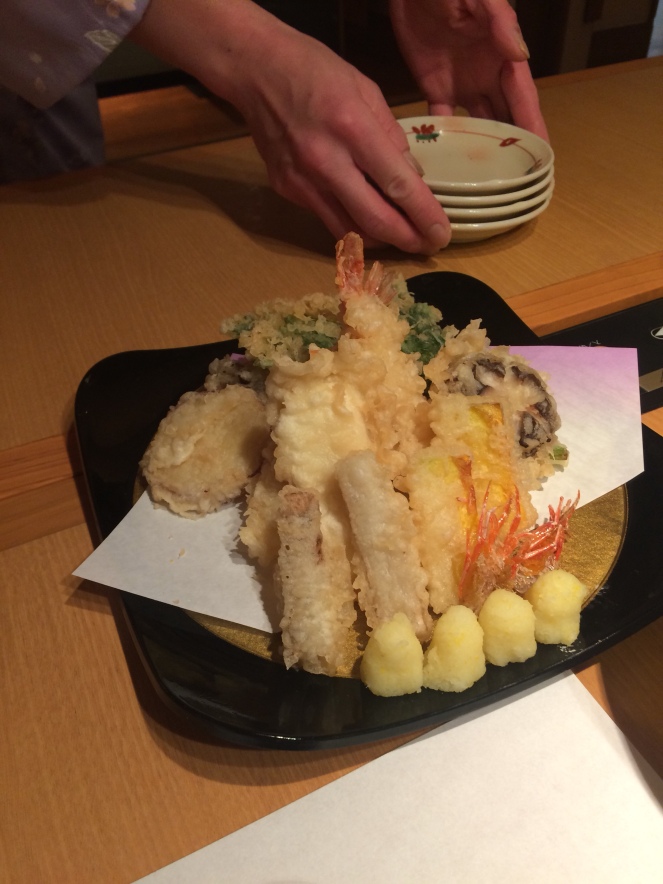 Sashimi – raw fish, sounds disgusting right. That’s what I thought until I tried it, it’s actually delicious! Dripped in soy sauce it goes down a treat, it’s often tuna, salmon and sea bream amongst others. 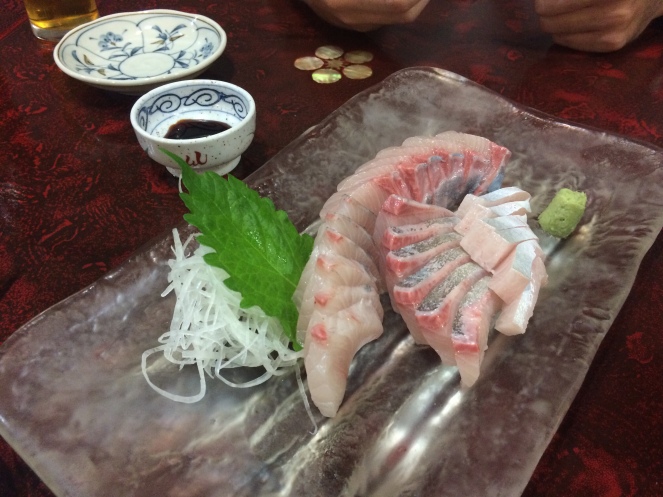 Okonomiyaki is a Japanese savoury pancake made with cabbage and your choice of topping. Hiroshima has its own style of okonomiyaki which is the same basis but served with yakisoba noodles. It’s topped off with the delicious Japanese mayonnaise.

Another staple Japanese meal is Ramen, you’ll find it nearly everywhere with some restaurants specialising in it. Ramen is a broth with noodles, meat, vegetables and a boiled egg, it’s perfect for a cold winters day. Ordering ramen in Japan is an experience on it’s own, the first time we visited a restaurant we were handed the menu and told to pay and choose via the machine seen below, there is then a receipt printed off which is given to the chef. Everything on the menu is found on the machine including drinks, each time you must pay and receive the receipt before giving it to the waiter to indulge in your goods. 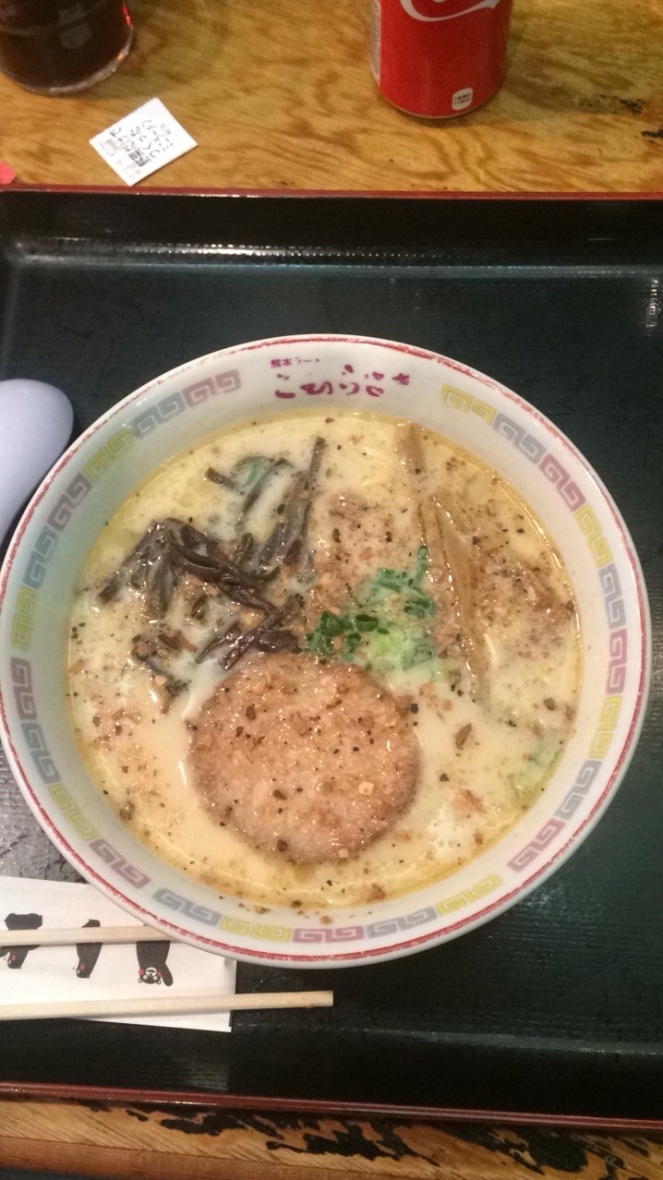 Tsukiji Market fish market in Tokyo is one of the most famous in the world, with tuna auctioning available to watch. Unfortunately after waking up and going to the fish market at 3am we were turned away as it was closed on the day we arrived. Once you’ve watched the auction at 5am it’s common knowledge you’ll find the freshest sushi and sashimi at Tsukiji. Kyoto also has a great market, Nishiki Market which has everything imaginable including every seafood you can imagine.

Teppanyaki is another popular Japanese cuisine which includes cooking on an iron grill, where you can to watch your chef prepare and cook your food in front of your eyes. The chefs are very talented using big knife come spatula to chop and manoeuvre the food around the grill. 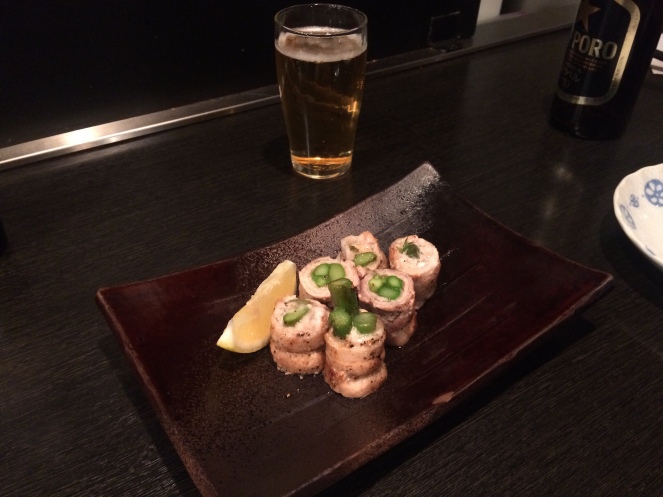 The continent of Asia is best known for its street food and Japan is up there with the best. From skewers, savoury pancakes and corn on the cob to crepes, ice cream and bread there all delicious. Leading up to Sensoji Temple in Tokyo there’s stall after stall selling gifts, souvenirs and street food. Pictured below I tried a pork cutlet in crispy better, it was amazing, as to be expected. 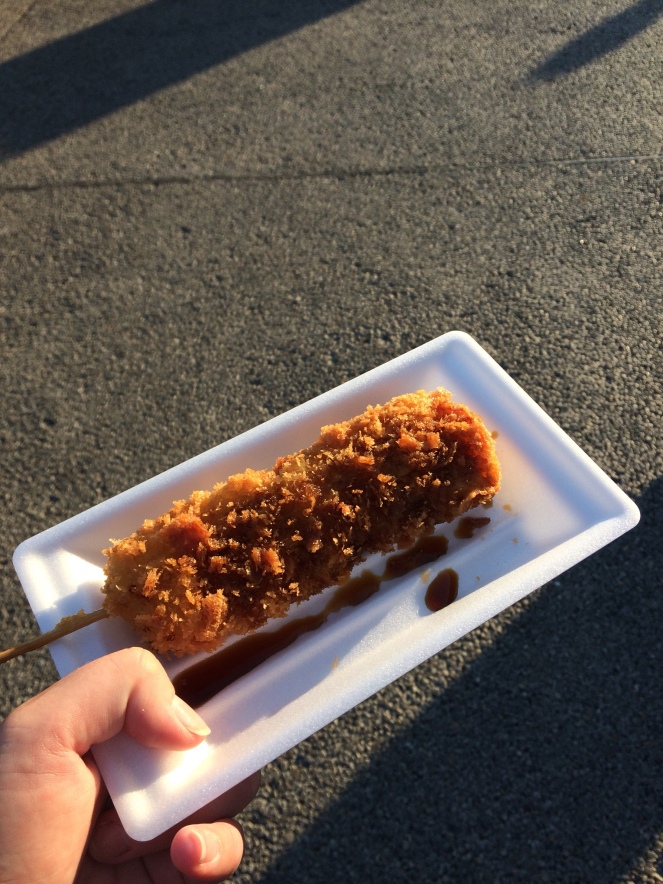 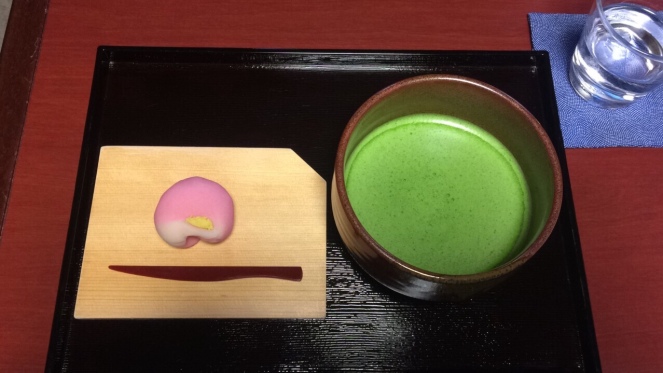 Like anywhere in the world Japan has convenience stores, the main three are Lawson, 7/11 and Family Mart. However Japanese convenience stores have amazing prepackaged food, an array of pot noodles, hot food, cold salads, sushi and buns – it’s heaven! 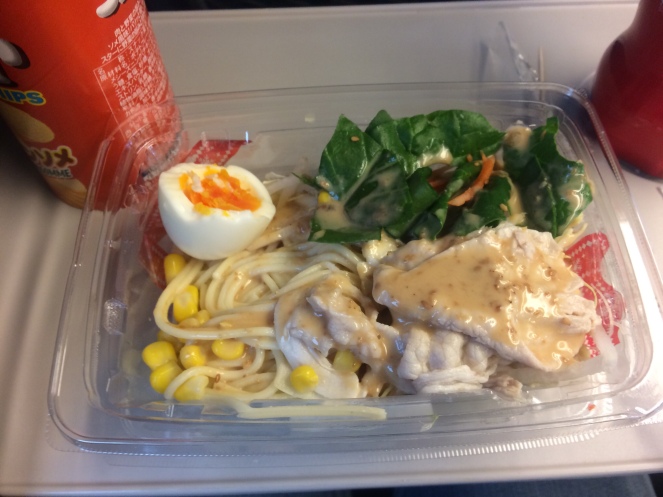 Sukiyaki is a Japanese meal prepared on a hot plate in the middle of the table. Firstly they placed the hot pot on the plate and added coconut water and soy sauce and then added very thinly sliced beef which cooked in the pot along with an array of vegetables from mushrooms, onions, burdock, carrots, tofu amongst others. It’s then dipped into a bowl of raw egg, sounds disgusting but nope delicious!! 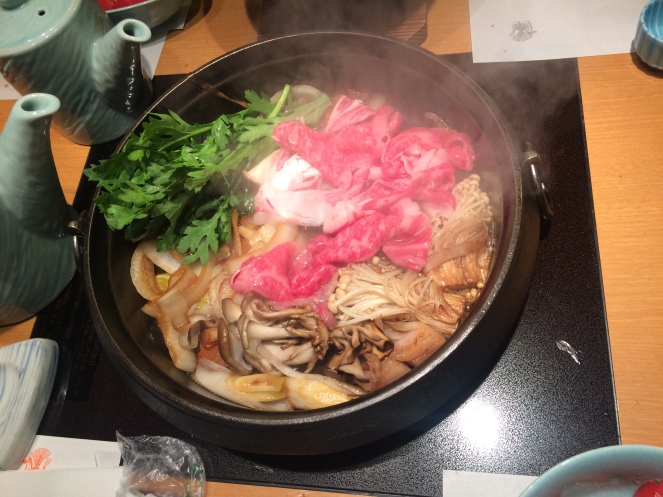 Japanese beef is amongst some of the best in the world, Wagyu beef is one of the most desired as it has intense marbling and next to no unsaturated fat. Kobe beef is a delicacy and is also well marbled with amazing flavour. Visiting Japan and not trying the beef is a crime, it’s a must! 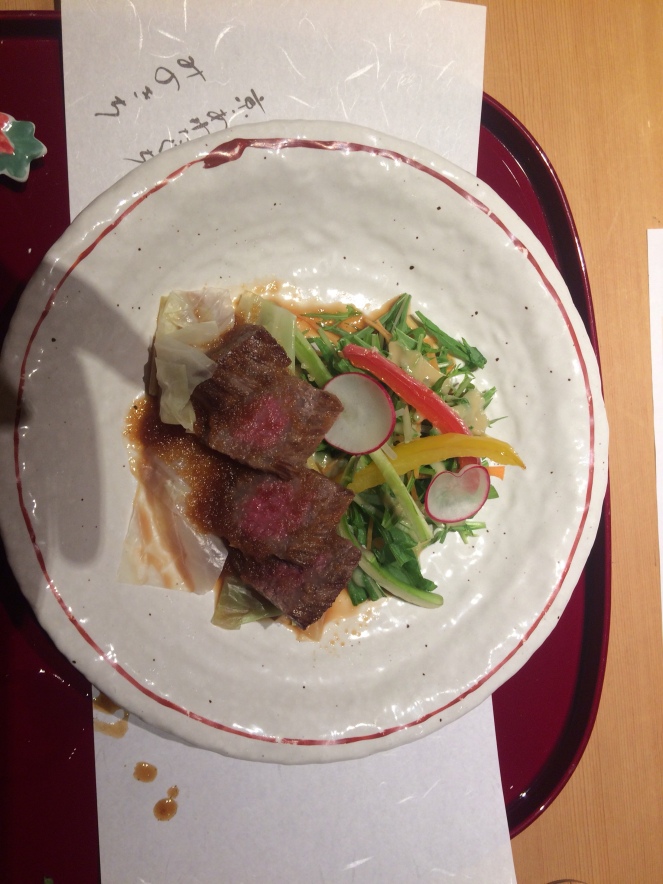 Edamame beans are a staple Japanese beer snack, there healthy but salty and go down perfectly with a nice cold Sapporo or Asahi beer. Another popular beer snack is gomame, which are dried anchovies. To look at they are not very appetizing but there crunchy and salty which make it perfect beer food.

Vending machines are widely found across Japan selling hot and cold drinks, the machine actually has an area that keeps the drinks hot which is great for a cold winters day. Train stations are filled with vending machines, its handy because you can pay with your Suica card, which is a transport card used around Japan like an Oyster card in London.

It may seem strange to have Kitkats on a list of Japanese foods to try but they have so many different kinds it’s unbelievable. You’ll be spoilt for choice if you go to the convience store expecting to get a milk or orange chocolate Kitkat. In Japan theres Shinshu Apple, Red bean, Strawberry, Sake and of course matcha flavoured. 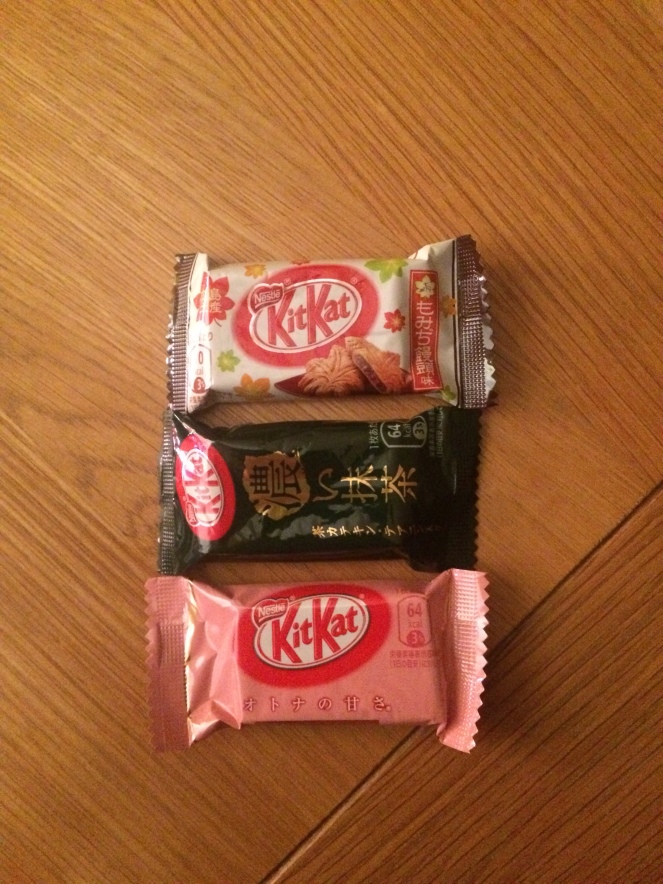 Yakitori a popular street food as well as sold in many restaurants and bars as a snack, basically it’s meat on skewers cooked on the grill. The skewer can have anything from fish, chicken, pork or even beef heart.

Kaiseki means a traditional multi-course Japanese dinner, on our first night in Japan my Aunt & Uncle treated us to a delicious Kyoto style cuisine meal, we tried all different kinds of things, we would never have chosen my ourselves like Whale, Turtle, Egg Curd and more.

Visiting Japan w trying Sake is impossible, Sake is a Japanese rice wine, you can drink it hot or cold and it is usually served in a lovely Japanese bottle and cup, the bottle is called a Tokkuri. 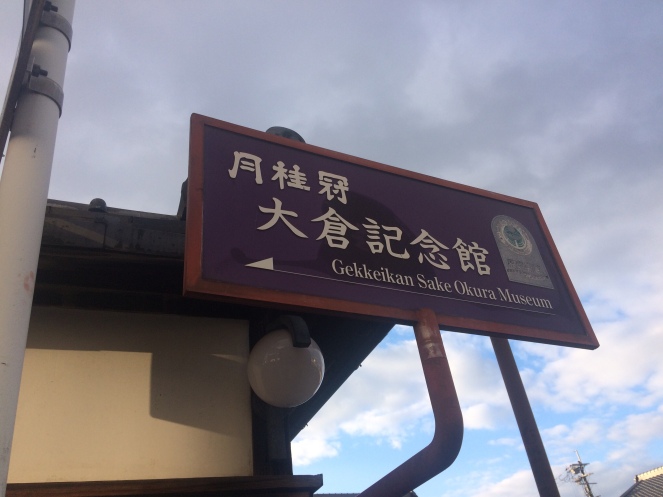 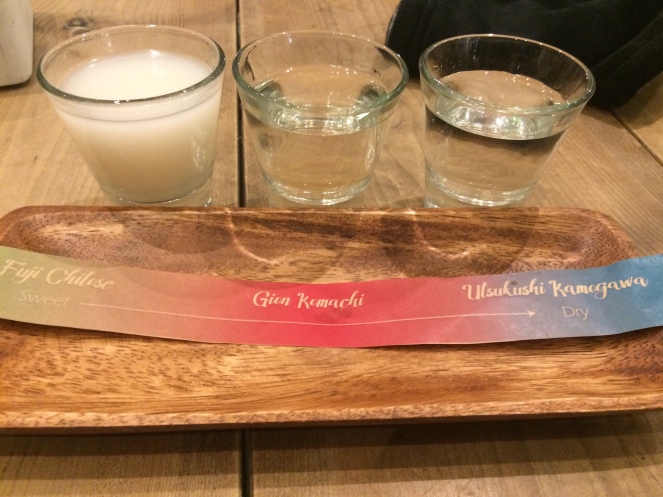 Fugu or puffer fish is a Japanese delicacy and can be lethally poisonous if it’s not prepared and cooked properly. Only licensed restaurants and Fugu chefs are allow to serve it. 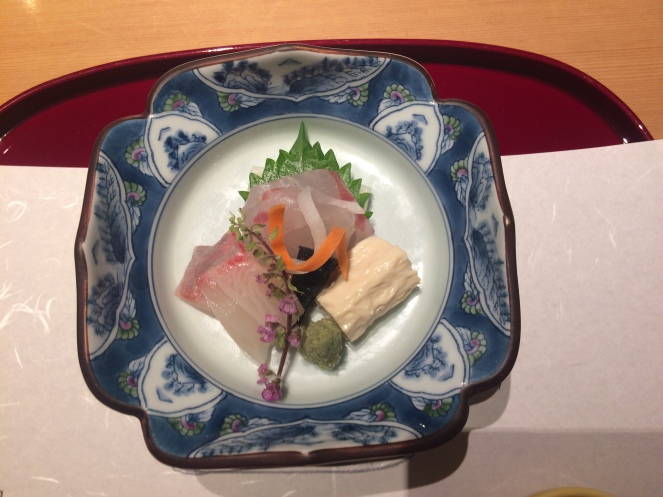