Staying the night in Portland we had a quick look around in the morning before heading off, there was a lot of fishing shops and cafes and we visited the first lighthouse of many on our Great Ocean Road trip, Cape Nelson Lighthouse which is located 10 minutes drive outside the town of Portland. Unfortunately it was Sunday morning which meant the lighthouse was closed so couldn’t go inside but the views were lovely overlooking the sea.

From Portland we drove to Port Fairy, which took about an hour around the coastline. Port Fairy is a stunning fishing town and I’m so glad we didn’t miss it out. Port Fairy is a lovely town with lots of great cafes and nick nack shops, we stopped by the town when we first arrived and a lady in the shop we was friendly and gave us a map of the town and where to visit. This lead us to Griffiths Island and of course the lighthouse! We parked up and followed the footpath past the small harbour where there were fisherman and dog walkers and into the conservation area which led to the lighthouse.

When we arrived in we cloudy but as time past the sun started to come out and it made the town look even more pretty! On our way out of the town we stopped by Clonmara an English inspired tea room for a taste of home. 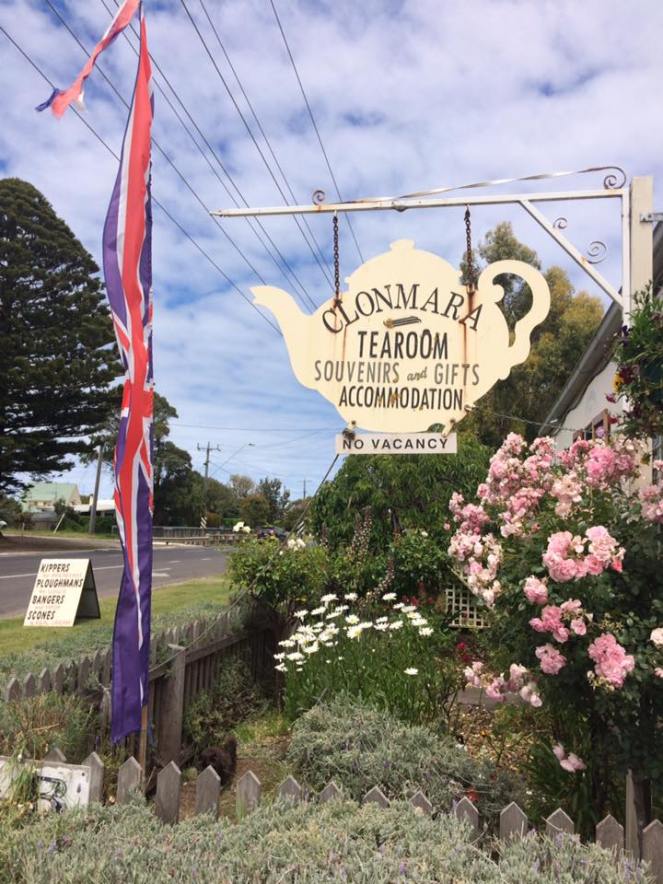 From Port Fairy we headed towards Warrnambool and on the way stopped by Tower Hill Wildlife Reserve, which is on the Princess Highway. The wildlife reserve is free of charge with walks around the grounds and up to an extinct volcano. Here we stopped our first wild Koala Bear and a lots of hungry Emus.

The notorious Great Ocean Road officially begins at Warrnambool and it is definitely one of the most picturesque roads we’ve travelled in Australia so far. Warrnambool is a small city with lots of tourist attractions for likely visitors. We didn’t stay long in Warrnambool but admired the views from a lookout above the city and then went down to the beach which was also really pretty. Our next stop was a brewery of course, breweries must be 2nd on our most visited attractions closely behind lighthouses because we’ve visited heaps. Having read the Great Ocean Road must do things we discovered the Flying Horse Bar & Brewery in Warrnambool which is one of the worst breweries we’ve ever visited, it may be because we were the only ones there and there wasn’t much atmosphere. That still didn’t stop Conor buying a tasting paddle with four of their craft beers. 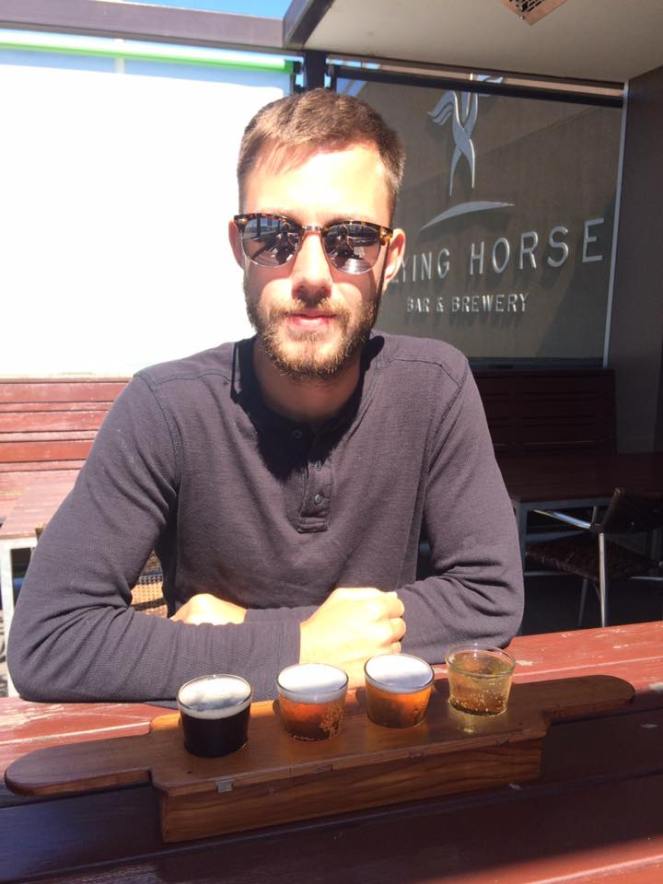 From Warrnambool we hit the official Great Ocean Road heading towards Port Campbell where the twelve apostles are. Driving on the Great Ocean Road our first stop was the Bay of Islands, we put it into our Apple maps and off we went. We followed the directions and ended up on a gravel road with a dead end, luckily a farmer was passing by and knew exactly what we were looking for, as the maps as well sends people in the wrong direction. Starting out again we hit the Great Ocean Road and of course it was signposted further along the road, the road wasn’t busy as it was early December and not that hot yet. Jumping out of the car we followed the small path to the outlook over looking the Bay of Islands and the views were stunning, from there we stopped along the road every 10 minutes at a different outlook, The Grotto, Loch Ard Gorge and London Arch. Of course the pictures don’t do it justice but the views were incredible, the sea was different shades of blue and the limestone a contrasting bright orange. 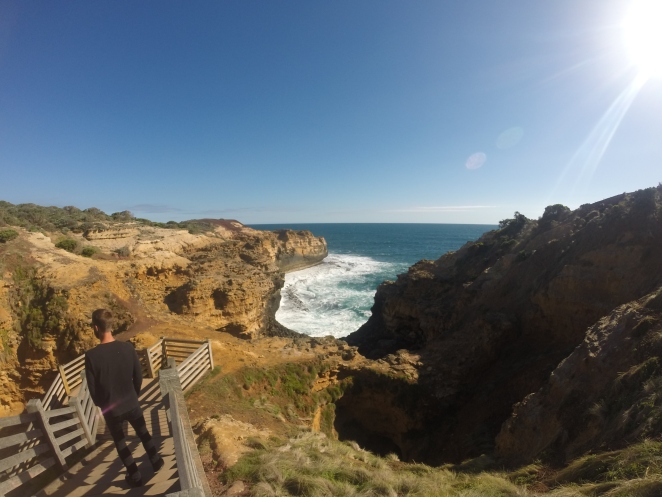 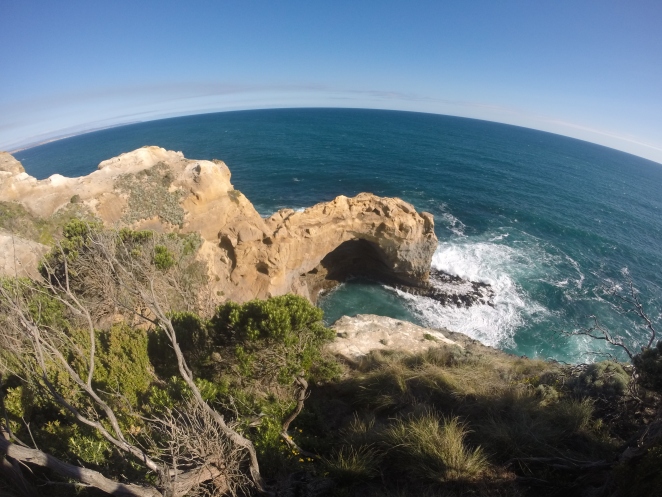 We headed for Port Campbell National Park where the twelve apostles are located and decided we’d stay there the night. We found a great campsite, Port Campbell Recreation Campsite, which has everything you need, toilets, showers and a BBQ and it’s just $10 each. We unpacked the van, had some dinner and headed to the Twelve Apostles just before sunset. The sun sets right behind the Twelve Apostles and the views were spectular. We took a beer each and climbed over the fence where everything was huddled together and had our own little viewing platform, it was amazing. 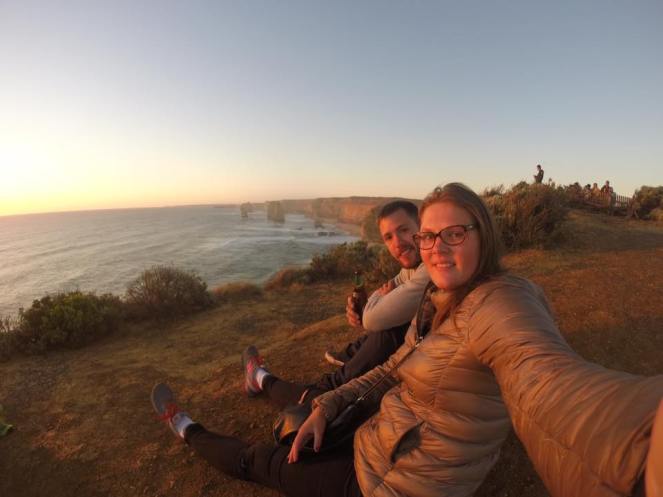 The next morning we went to visit the Twelve Apostles again in daylight and it just wasn’t the same. I’d definitely recommend going for sunset, it’s such a difference and absolutely stunning. From Port Campbell and the Twelve Apostles we headed to Cape Otway National Park and yes you can guess another lighthouse. Cape Otway lighthouse is apparently Australia’s most  important and oldest working lighthouse. We had a very informative talk from one of the tour guides which explained why it was Australia’s most important lighthouse. Apparently as ships used to arrive in Australia this lighthouse would be the first sign of land they would see after nearly 3 months at sea. This coastline is also known as a treacherous bit of sea with lots of shipwrecks and also where the Bass Straight and Southern Ocean collide (not that you can tell). After the talk we headed up to the top of the lighthouse which is right on the side of the coastline, with great views over the shipwreck coast.

After Cape Otway lighthouse we drove inland into the Cape Otway National Park and up a very windy road to Otway Fly Treetop Adventures where we’d booked onto one of the zip line tours. Having done Go Ape zip line tour in the UK I thought it would be similar, which it was. It cost $114 each for a 2.5 hour guided zip line tour, which I thought was way overpriced for the experience although we did enjoy it. After the tour we headed to the treetop canopy walkway, which is the longest and tallest walkway like this in the whole world which is pretty cool.

That night we drove back down the windy road almost to the lighthouse to Bimbi Park, a campsite which offers an amazing experience of camping under the koalas. Sure enough we pitched up and then heard an loud call, it sounded like a pig but we looked up and it was a koala bear. Throughout the night we night we saw a couple more koalas which was amazing! The campsite was great, it had lots to offer, a great kitchen and lounge area with books and a TV, you can also go horse riding, play mini golf or take a walking trail to the lighthouse. 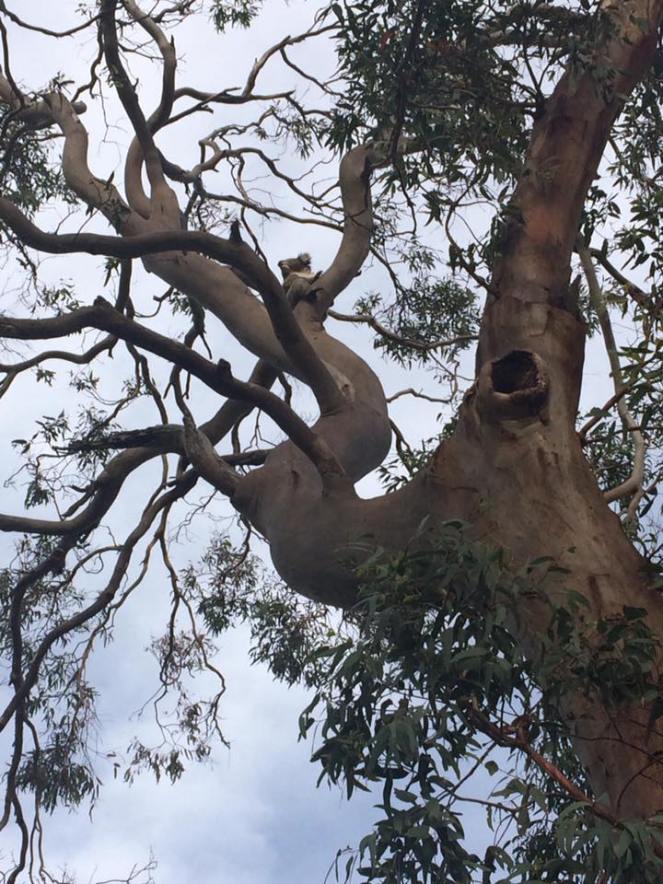 The next morning we headed along the coast to Apollo Bay, a large beach side town with amazing views and a lovely beach. We spent the day in Apollo Bay after checking into a Apollo Bay Recreation Reserve which was located a 10 minute walk from the town centre. We headed into the town and to the beach, Conor then spotted another brewery, the Great Ocean Road Brewhouse so of course we had to stop by. They had a huge selection of beers on their menu from Australia and Internationally. 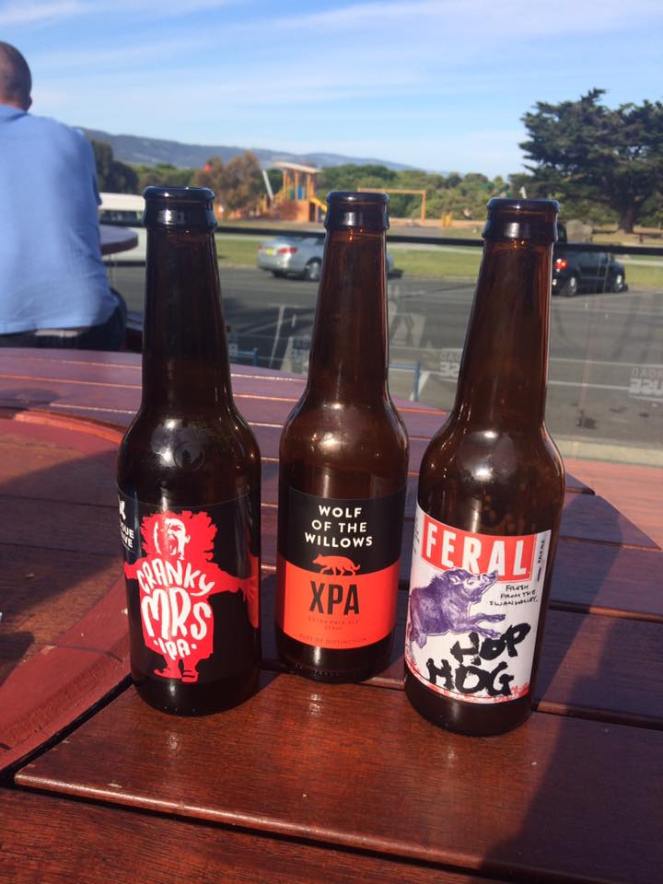 For dinner we fancied some fresh fish and chips and asked around to find out where the best place was to go, the headed to Apollo Bay Seafood cafe which is on the main street. They had all the fresh fish in a counter and had an amazing fish platter on offer, Conor went for fresh oysters then blue gardenia fish and I had barramundi which is one of the most popular in Australia. 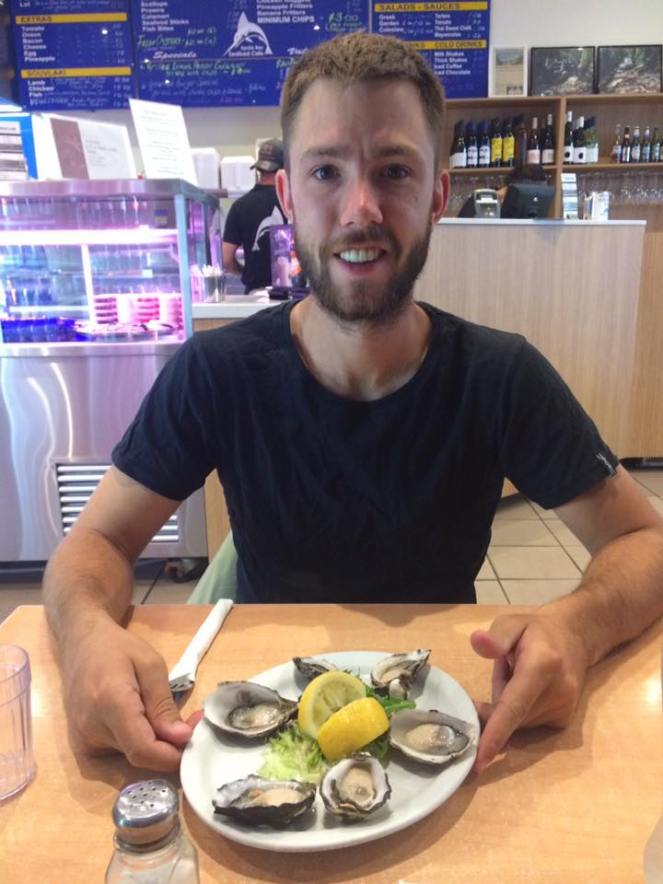 Our next stop was Lorne, we headed along the Great Ocean Road and the views were amazing on this section as your driving right next to the coastline. There’s plenty of places to pull into and take pictures along the way. Lorne is another small town with lots of great cafes and surf shops, we didn’t stay long but admired the view the headed off. From Lorne we went in land again to a tiny village in Cape Otway National Park called Forest. We headed here because Conor found out there was a brewery here, Forest Brewery which is a microbrewery offering food and great beer. Conor opted for the beer tasting platter, with 8 beers to try for just $14. 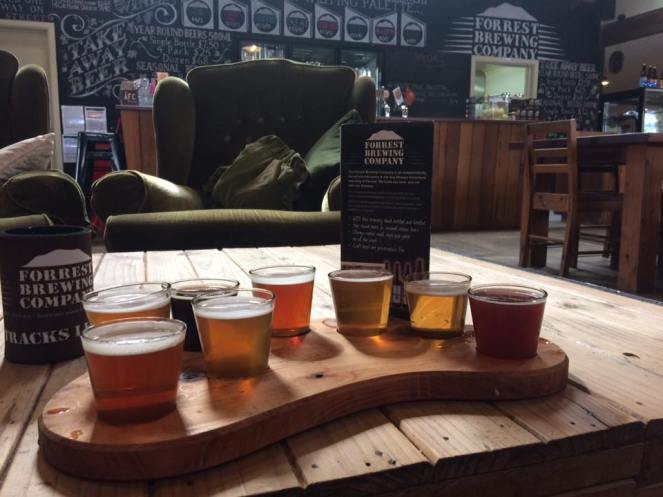 From Forest we drove back to Lorne and along the Great Ocean Road to Aireys Inlet, Anglesea, Bells Beach and Torquay, which were all small beach towns. Bells beach is a really known beach as the as the Ripcurl Pro is hosted there, we visited the beach in April when it was cold and rainy so it was great to return with the sun out. In Torquay we headed to a great cafe for brunch and a catch up with a friend from Mount Buller before heading back to Geelong.