Dubai was our first stop on our travels, we decided to choose a nice hotel to relax in as we were going to be backpacking for the next 2 months. After looking and looking online we finally chose Four Points by Sheraton. We had a budget in mind and this was a little more than we budgeted for. We looked for hotels in our budget but they all had really bad reviews so decided to pay a little extra and make sure it was nice as we were staying there 5 nights. We paid AED 2,025 or £382 for 5 nights room only through booking.com.

The hotel isn’t far from the airport, approximately 20 minutes drive and it cost us  AED 100 or £19, I believe this was way overpriced because we got ushered into a VIP private taxi.

Check in was smooth and the room was nice, it had a large queen size bed, a sofa and table, TV, fridge, tea and coffee making facilities and a modern bathroom with a shower and bath.

Our main purpose for booking this hotel was to relax, we already knew there was a rooftop swimming pool so spent our first morning relaxing there. The pool is clean and large enough, there are outdoor showers and a pool bar however the drinks had to come from downstairs so they took a while. The pool is on the rooftop and whilst we were there they were building another large building next door so there so it was quite noisy and distracting.

The facilities are great, including a underground pub, Yesterday restaurant and pub with sports playing, ladies night on a Wednesday with discounted cocktails (the rumours aren’t true – you can drink in Dubai)! Which cost AED 132 or £25 for a beer and a cocktail. There was also a cafe, The Family Room open during the day serving sandwiches, coffees and snacks as well as two restaurants, Centro Citta and The Eatery Restaurant open in the evening, which we ate at on our last night. They had different cuisines on different nights but we ate on the Asian night, it was a buffet style and help yourself which cost AED 385 or £72 including 2 alcoholic drinks.

All the staff were friendly, we booked a excursion through the hotel concierge, we booked the Golden Sands Desert Safari which was great and we were picked up from the door and cost AED 250 or £47 for both of us including dinner. The hotel also offer a free shuttle bus to and from Kite beach each day which is about 20 minutes away. 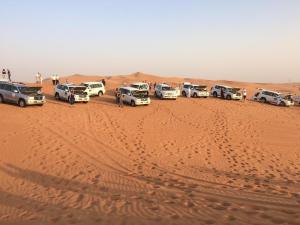 The hotel location isn’t the best and as you can see from the picture below it is not in the city centre. The metro station was about 10-15 minutes walk away, which wouldn’t be too bad but it was boiling whilst we were there!

We only had one problem whilst staying here, we stayed in one of the rooms on the right hand side of the hotel, on the first evening there was really loud music from a hotel opposite this went on until about 3am, I slept through it but Conor was wake and complained the management said they’d ask them to turn it down however the second night the music started again until the early hours. I was awake the 2nd evening and couldn’t sleep either, the pillow was shaking. At about 2am we rang down to reception to complain again and they moved us into a Suite on the other side of the hotel, this was really appreciated and we had a good night sleep for the rest of our stay. The Suite was much larger with  a separate bedroom, living room, kitchen with washing and drying and bathroom – it was lovely.

This hotel was great but if we stayed again I would stay at the sister hotel which is nearer the city centre.