We didn’t plan to spend as many days in Chiang Mai as we did but opted to stay and go on a 2 day jungle trek rather than go to Chiang Rai. We searched online and in the guesthouse for jungle treks but found the one we were looking for straight away and it was really good value for money. We rang the travel agency, a large Thai company from the guesthouse but they said we needed to go directly to the office which was nearby out guesthouse. We found the office easily enough and the agent said they had two spaces available for the trek leaving the next day – perfect. We booked a 2 day, 1 night jungle trek including 4 meals, elephant trekking, trekking to the overnight camp, overnight accommodation, a visit to a waterfall, white water rafting and bamboo rafting all for £25 each!

We were picked up from our guesthouse at 10am and there were already 6 people on the truck. We got on really well with all the people in the group, a French couple, Dutch couple, an American guy and a Spanish and Dutch couple. We set off and the first stop was the local market were our guide T, bought local food for our dinner. We then stopped off for half an hour at the butterfly farm, we followed the crowd through the butterfly farm, there were some huge butterflies which luckily weren’t flying around otherwise I would have been out of there.

From the butterfly farm we continued into the jungle passing numerous elephants. We arrived at the elephant farm and bought bananas and bamboo for your elephants to eat. After riding the elephant outside of Bangkok, Conor wasn’t keen to ride again but we did. The elephant trek went through a small village, the scenery around us was amazing. We then arrived at a hill tribe and got off the elephants and a baby elephant joined us – so cute! We then went down to the river and crossed via what you can only describe as a cage. We both fit into the cage which went from one side of the river to the other via a wire high in the trees. We had lunch overlooking the river and overlooking the elephants bathing in the water, it was so picturesque.

After lunch we all got ready to begin our trek, I’d already been bitten to death by mosquitoes so made sure I applied lots of spray. We’d also began taking our malaria tablets before arriving in the jungle. Our guide T said the trek would take about 2 hour until we reached the small village where we’d be staying for the night. Conor and I both had our day rucksacks filled with a extra change of clothes, a towel etc. In our group there were 9 of us, me being the youngest. We began the trek up the steep hill which was never ending, it was so hot and I trailed behind. I really struggled with the trekking as it was so steep and so hot, luckily halfway through Conor took my bag for me as he wasn’t struggling at all. Our guide made sure we had lots of stops along the way, and after 2 and a half hours the village was in sight. I don’t think I’ve ever sweat so much in my life! Our guide, T said that it’s possible to get up to the village in just 45 minutes if you don’t stop, which I thought was incredible.

When we made it through the village and to our home for the night the view made up for all the walking. It was amazing overlooking the village, jungle and further out over Chiang Mai. First things first we all got a beer and celebrated making it to the top. Our group were really friendly and chatty and we had a great night exchanging stories. The local girls made our dinner for us which was delicious, green curry and rice. I also made some new friends, there was a group of 3 or 4 children which somehow attached their selves to me which surprised me as I’m not a children person. The children were so cute though and after we’d finished dinner they can back in sparkly outfits and sang for the group. 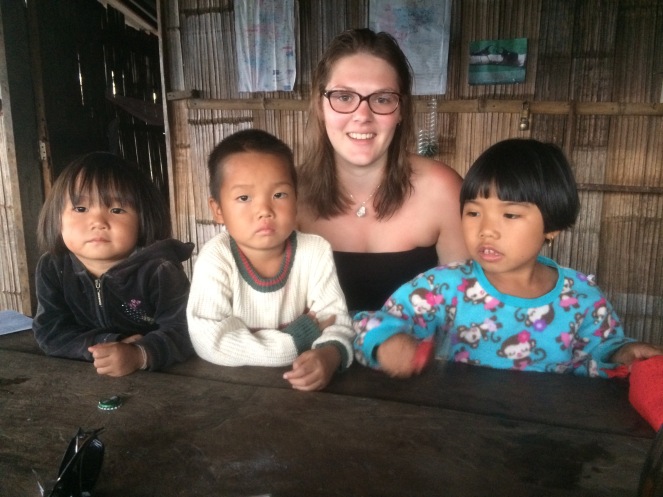 Once the night had set in it was pitch black. Our bed was a thin mattress with sheets and a mosquito net which was shared with everyone else. There were 6 double beds in the room so anyone snoring was identified immediately. I didn’t sleep to badly considering but I was awoken by the roosters and chickens at about 7am. The local girls made our breakfast for us again, scrambled eggs and toast which was fine.
At about 8.30am we left 3 of the group at the camp as they were continuing the trek for an additional day, I think 2 days we enough for us! The trekking was mostly downhill which sounds easier but it was so steep, I fall over a couple of times. After about an hour trekking downhill we arrived at a waterfall and took the opportunity to cool down. From there we continued about another hour downhill and we saw the river, we knew the end was insight. We followed the river downhill passing elephants on our way. We then arrived at the White water rafting venue, we were given helmets and life jackets. I strapped my GoPro into the life jacket and recorded the whole thing. The White water rafting wasn’t as extreme as we hoped, the Rapids weren’t very fast but it was still fun. We then got off the raft and onto bamboo raft which we took the rest of the way down the river to our next stop for lunch and then back to Chiang Mai. 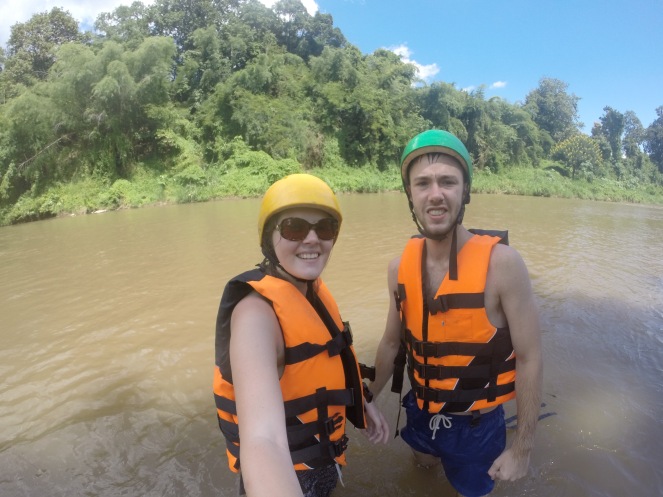 We really enjoyed this trek and would definitely recommend it and even do it again, it was great value for money.