I’d been stuffing bits and bobs into my suitcase for the past month with no particular organisation. The evening before setting off I had the nightmare job of unpacking everything and repacking in some order. It seemed like I’ve packed nearly everything but the kitchen sink packed into my backpack which is going to be my home from home for at least the next 3 months until we reach Australia.

So what did I pack –

So the packing was done and we had our flight booked for 10am on Monday morning, not a bad way to start the week. We had to set off from home in Windermere to Manchester airport at 5am and reached Manchester airport at 7am, checked in and dropped our bags off then had a farewell breakfast with my parents. Following in the footsteps of my mum and dad who met whilst traveling Austrilia off we went. We said our goodbyes and headed for security, after a quick look through duty free it was time of board our Emirates flight to Dubai.

Mum setting off in 1991 for her round the world trip 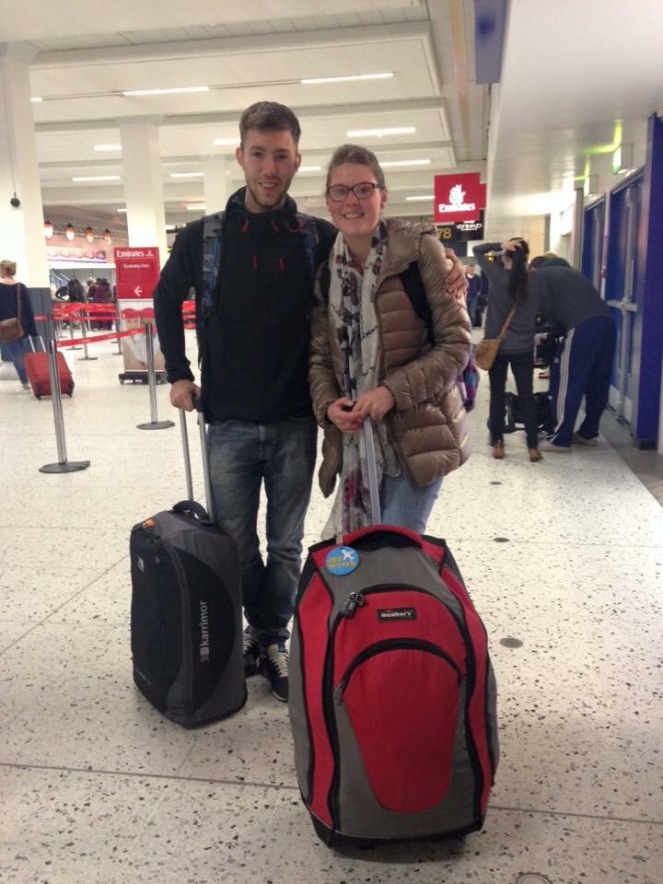 Conor has never flown long haul so when we boarded the plane and found our seats Conor was amazed. We settled into our seats, choose our films and patiently waited for the food (my favourite part). On today’s flight we had lunch, a nicose salad followed by chicken and mash for me and lamb and rice for Conor. A little while later the stewardess came around with afternoon tea, a selection of sandwiches, a scone and tea and coffee.

We arrived in Dubai at 8pm, local time, after setting off from Manchester 7 hours earlier. The flight seemed to fly by, ha ha. Disembarking the plane we followed the signs for passport control and gained our first stamp in our passport, with many more ro follow. We collected our bags and searched for the taxi rank. We quickly found the taxis, and joined the massive queue, although the queue was mawsive, it was really well coorindated with a man showing passengers into the next available taxi and we were st the front in no time. Whilst waiting in the queue I read the sign for the taxis, there was a variety of different ones from Family taxis, Woman and Children only and Public taxies – all starting at 25dirham approximately £4.50 then there were VIP taxies starting from 50 dirham approximately £8.80.

When we finally got to the front of the queue and the man asked how many people, 2 we said. He directed us into one of the black taxies, which we realised were the VIP taxies starting at 50 dirham. What made it VIP I wasn’t too sure? We couldn’t get out now so gave the driver our hotel address and off we went. After 15 minutes we arrived at the hotel, lovely looking from the outside. The taxi meter stopped at 79 dirham, £14, but unfortunately for us we only had a 100 dirham note. We handed over the note expecting not our 21 dirham change but no off he went never to be seen again.