My boyfriend and I visited Bruges at the end of February 2015, he had bought it for me as a 21st birthday present, when he first told me where we were going I embarrassingly asked ‘where?’. It wasn’t somewhere on the top of my radar however once I had done my research I discovered a beautiful medieval city in northern Europe, also known as the Venice of the North, having never visited Venice I wouldn’t like to compare.

First things first we booked our flights, Manchester to Brussels Charleroi airport £36 return each, what a bargain! However once we arrived we discovered Brussels Charleroi wasn’t actually in Brussels but 60km outside. Our early morning flight got us into the airport approximately 11am which was great, we then got a coach from Brussels Charleroi to Bruges, and the company was Flibco costing 21 Euro each. The bus took 2 hours calling at Ghent before arriving at Bruges train station. Probably not the most logical route, 1 hour flight from Manchester then a 2 hour coach to Bruges, we later realised that there was an airport in Ostend although I don’t think flights are as regular.

Once arriving at Bruges train station we soon found our way to our hotel, located next to Minnewater Lake or in English the Lake of Love about a 10 minute walk. Once we got settled in we got a map from reception and walked towards the centre another 10 minute walk. On the way we passed lots of souvenir shops, beer shops and chocolatiers. Visiting in February the weather was similar to England, you needed to wrap up warm at night, but it the day it was sunny and cold. We arrive in the heart of the city, Bruges Market Place surrounded by cafes and bars, the Belfry tower, Bruges Beer Museum and the Provincial Court. With it being cold we ventured through the square and explored the streets which were quiet, looking for somewhere to eat, we found Bierbrasserie Cambrinus, a crowded pub serving local cuisine, with over 400 different Belgium beers. We were lucky to get a table, looking through the menu we didn’t know where to start with beers as there was so many, we asked for a recommendation from the waitress which was very nice, the food was also good, omelette for me and beef stew for Conor.

Day 2 we woke up early and ventured out into the city, we made our way to the market square again and noticed the Bruges Beer Museum, ‘The Beer Experience’, we opted for the ticket with 3 tastings of 15cl of beer at the end which cost 11 Euro each. Before we entered the museum we were both given an iPad mini and headphones, it was a different kind of museum than I had ever visited. There were pictures placed around the room with QR barcodes, we had to use the iPad to scan the barcode then it came up with an option for reading, listening or watching. Either a paragraph about the subject, a video or a person speaking about it, It was a really good innovative way to use technology in the museum, the museum was over two floors which didn’t take all that long to go around, we then spent some time in the bar area were we had three beers each included in our ticket. The bar was great, a good atmosphere and looked right over the market square. 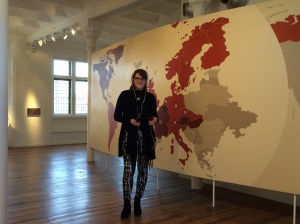 By that time we were ready for dinner, as it was lovely and sunny we looked for a restaurant with outside seating, we sat down in the warm sun but quickly changed our mind when we saw the prices of the main courses, 30 euro each. We walked back to a restaurant which had a lunch menu with 3 courses for 20 euro each, we both selected the mussels for main which were delicious, my first time having mussels but I really enjoyed them.

We decided to climb off our lunch, by climbing up the belfry or belfort tower which is a medieval bell tower located in the market square, tickets cost 8 euro for an adult and 6 euro for a student. We climbed to the top of the 366 steps which had panoramic views over the city and the market square, it was very busy and the stairs were very narrow and steeps so it was a bit of a squash when you met someone on the steps but that can’t be helped. When we arrived at the top it was very windy and just as we were about to leave the 47 melodious bells started chiming. 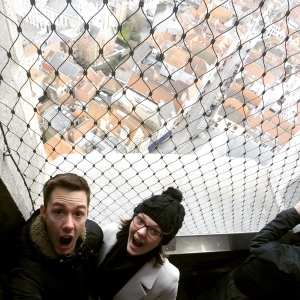 Day 3 we visited the only brewery in Bruges, De Halve Man brewery. Tours are run every hour, we arrived around 15 minutes early and were the only people but it soon filled up. The tour was fully booked by the time it began, we had a fantastic English speaking guide who took us on a journey through what ingredients go into beer and the process of brewing beer. The tour was really interesting and it helped that we had visited the beer museum the day before. We even got a complimentary pint of beer at the end – what more could you ask for.

After the brewery tour we wandered through the streets of Bruges, looking in the churches on the way through, we then decided to take the canal boat trip. We got the tickets which were 8 euros each, bargain and waited in the queue, which soon went down with boats dropping off and picking up passengers every 15 minutes we were soon on the boat. The boat driver and tour guide were fluent in not just English but French, German and Spanish, he talked us through the sights and sounds of Bruges by canal in all three languages.

Whilst we were waiting for the boat we spotted an outdoor bar with heaters so decided to go for a drink! The bar itself was only small but had a large terrace overlooking the canal with patio heaters, we both got a Belgium beer, mine pink of course and we also got some Belgium cheese – it was prefect.

Day 4 was our last full day in Bruges, we had a little lie in then wrapped up warm and headed out. I had spotted a bike hire shop earlier in the week so we directed our way there and rented two bikes for 2 hours. We began cycling through Bruges, not really knowing where we were going. We had been cycling for about 40 minutes when I decided to cycle onto the rather high curb, not a good idea. Pop when the wheel. Once realising I couldn’t ride the bike and we had no tool kit we checked the map to see how far away from the shop we were! Just our luck we were at the other side of the city and it had just started raining! We hurriedly pushed the bikes through the crowds and finally arrived at the shop were we changed the bike, by this time we only had 20 minutes out of 2 hours left so stayed close.

After dropping off the bike we were starving and made our way to the nearest restaurant, a burger bar! We both ordered a large burger and fries then headed back to our hotel to get ready for our final night in Bruges!

Once ready we looking for somewhere to eat, we headed to the square and then a little further. It was almost 9pm by this time and some places were shut, we then found a quaint little restaurant – we’d found a hidden gem! Once finished at the restaurant we spotted a live singer beginning! It was in an Irish Bar, we had heard great reviews about this bar – the Druid Cellar! We went into the bar which was a 16th century cellar, just as we walked in the singer started. It was a great atmosphere and the singer talked to the small audience of English, Spanish, Polish, German, French and Dutch people. As it got later, we had got friendly with the owner and his wife, 12pm hit and the door got locked and the ashtrays came out. We were in a lock in, I must say the rest is a little blurry but it was a night to remember.

The next morning we woke up to the knock of housekeeping, 11.30am! Check out was 11am so we frantically jumped out of bed and started packing, after checking out we grabbed a baguette for lunch ate it at Minnewater Lake. Our flight wasn’t until later so we had a bit of time to kill before we needed to get the coach back to Brussels; we walked around the lake and through a park and discovered a small quirky café, hot chocolate and waffles were just what we needed! Another Belgium tradition, it was delicious! The hot chocolate was a mug of hot milk with a stick of chocolate which was placed in the milk to melt – divine!

Not wanting to cut it short we got the coach a little earlier than planned and headed back to Brussels to catch our evening flight back to the UK.

Overall we had a fantastic city break in Bruges and both said we would recommend and return! It’s such a pretty city with so much to do – before arriving we were worried if there would be enough to do and see but there definitely was. My only suggestion would be to drive or get a ferry to Ostend rather than fly to Brussels as I didn’t realise how far it was.