Today we’d organised a trip to Ourika Valley which is in the lower Atlas Mountains. It took about 1 hour to get to our first destination which was a Berber village. All 10 of the group, who where Spanish, French, English and German got out on the minibus to be welcomed by a group of men trying to sell necklaces. After saying no thank you on numerous occasions they persisted on following us all the way into the village.

The tour guide was very good and was born in the village. There was a handful of houses which we walked through and came across goats, sheep and chickens. We were then invited into a Berber house which was two levels. The ground floor had 3 rooms, included shower room and two rooms which housed a cow and its calf and a donkey. The second floor included 1 small bedroom, two kitchens one for making food and one for making tea and a lounge area. We all congregated in the lounge area were the Berber lady made fresh mint tea and offered bread and oil. Leaving the Berber village we then stopped at an aroma garden. This was a garden with lots of different plants including thyme, rosemary, argan trees and lots more. The guide led us around the garden picking off leaves for us to smell, we then went into a room which had lots of produces and spices where the lady described the produces and ingredients and what it was good for.

Next we stopped by the side of the ‘road’ where there was 5 or 6 camels. I jumped at the opportunity to go on a short ride! At first it was really unsteady but got better throughout.

At this point it was well past lunchtime so we headed to a cafe which was in the dried river bed. The river bed was dried with a small stream trickling down where you could eat with your feet in the water. All up the river bed was sofas and chairs which the guide explained was because of ramadan the families all socialised together. 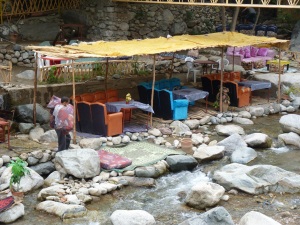 After lunch we headed to a waterfall right at the top of the valley which looked down the valley. It was a difficult climb into the mountains to reach the waterfall but even there stalls were set up, I don’t imagine they get much passing trade. It was much cooler in the valley than in the city when I climbed into the water I got a shock it was so cold, it was freezing!It was lovely to get out of the city for one day as its so hot and busy. It gave us a chance to see how some of the original Berber families still live in the mountains of Morocco.Tonight we had a lovely meal at the Kosy bar which is just opposite our riad. Reading great reviews on trip advisors we’ve walked past every night but its been closed, not tonight! As it was the last night we treated ourselves to a lovely meal, the Kosy bar is modern restaurant with Moroccan dishes but also sushi and meat dishes. It was a lovely way to end our last night. I would highly recommend it plus they do great mojitos!