After arriving in Barcelona late the night before we got a good nights sleep and were ready to explore the city. Our hostel was located 5 minutes away from Plaça Catalunya and Las Ramblas.

We decided to purchase a 2 day bus ticket on the city sightseeing bus which has three routes which travel all over the city. We boarded the bus at Plaça Catalunya on the blue route which travels to all the iconic areas of the city, firstly we travelled towards Sagrada Familia as it was lunchtime it was very busy outside and around the Cathedral therefore we decided to stay on-board the bus rather than go inside. From the outside the Cathedral is amazing but still unfinished which means there is scaffolding obstructing an incredible view. Continuing on the bus we next disembarked at Park Güell, the bus dropped us about 10 minutes walk from the Park. 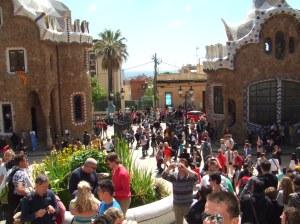 Arriving at Park Güell inevitably it was a tourist trap. At first glance the Park was incredible, filled with architecture along with hundreds of people. We squeezes our way through the crowds and made in to the top of the stairway which had wonderful views of the park below but also the city and out towards the sea.

Arriving in Barcelona just two days before the Champions league final the Nou Camp was off limits to all visitors before the match therefore we could not visit the grounds. There was not much to see outside the football grounds just lots of stalls selling Barcelona FC gear which didn’t interest me.

Port Olímpic is a picturesque marina which was originally built for the Olympics in 1992. The port is just a short bus ride from the Las Ramblas alternatively there is a metro station just across the road. The marina hosts bar, restaurants, shops and a beach. We spent a lovely afternoon lounging on the beach which was packed as it was a national holiday.

I found Barcelona had a great mix of tourism assets, set on the coast visitors can enjoy the beach and port but also enjoy the city life as well. I visited at the end of April which was a good time, the weather was in the 20s so not unbearable however there was a breeze. We enjoyed dining outside, days at the beach and the narrated bus tour.

First Aperol of the year 🍹☀️
Running in April vs January, probably still same temperature 🥶
As good as lockdown birthdays get for Dad today, picnic in the Langdales 🥰🥳
Don’t want the sun to disappear again ☀️🌼
Great morning abseiling at Cathedral Quarry with Jack from @adventuring_uk 🧗‍♀️
What a transformation! 🤩 swipe for before ➡️