We had landed in LAX the day before in the afternoon and arrived at our accommodation late. After my first long haul flight, of nearly 13 hours I was shattered and went to sleep early ready for exploring tomorrow. We were staying just down the coast in Marina Del Ray harbour which is about a 30 minute walk to Venice Beach, the weather was disappointing as although it was warm it was grey and overcast not at all what we were expecting.

Woke to a grey overcast day, had breakfast then caught the bus down the road to Venice, had a walk on the beach and along the Venice boardwalk, everyone was setting up for the day, great people watching. We were told that the clouds would burn off and the sun would be out by 1pm. Venice boardwalk is lined with cafes and restaurants on one side and palm trees, beach and the ocean on the other. 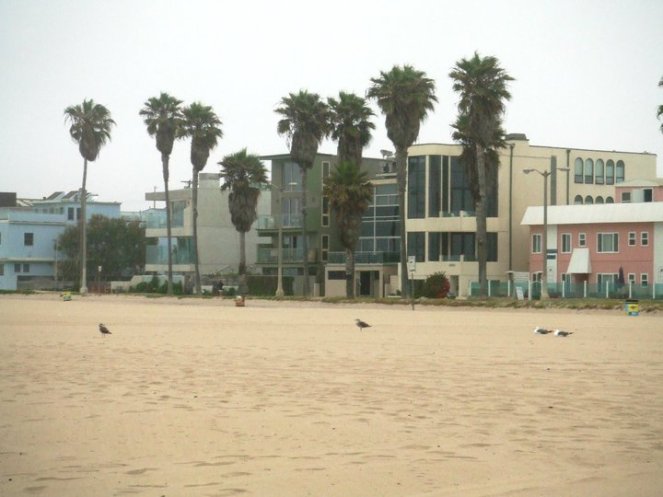 We felt we should of been doing something other than walking there were people on bikes, go-carts, segways, in-line skates, skateboards. Everyone with a bike basket has a little dog in it. Being just 16 years old I was amazed at the people who just randomly strike up a conversation with you as you walk along. There were lots of groups of school kids on the beach either surfing, playing football or in the park.We past the famous Muscle Beach Gym, an exclusive outdoor gym famous for bodybuilders including Arnold Schwarzenegger.
Just down from Venice Beach is Santa Monica Pier, the pier was busy as I presume it always is, as it’s the end of Route 66 and was in the film ‘The Sting’. The pier has a ferris wheel and other theme park games and rides.

We walked along to 3rd Street promenade and that’s were I found my favourite shop ‘Pinkberry’ selling frozen yogurt with toppings I had watermelon with fresh strawberries and pineapple and toasted flaked almonds, I’ve already got my loyalty card as I will definitely be going back.

The Sun finally broke through about 2pm and it was then hot, hot, hot!!! We looked around the shops, had a drink then sat on the beach before walking back, had some food at the Sidewalk Cafe in Venice, given a choice of portions sizes think its always got to be small, got the short bus ride back to the hotel, a great day was had by all and we have definitely caught the sun, some of us more that others.